Doctors have been told to offer cholesterol-lowering statins to millions more people in a massive and controversial expansion in prescribing.

Four in 10 adults in England, Wales and Northern Ireland are now eligible for statins, even though many are at low risk of a heart attack or stroke.

The medicines regulator, NICE, says it will save lives.

There has been vocal opposition to the plans, and doctors’ leaders said they had no confidence in the decision.

But all sides of the debate say people who are already taking statins should continue to take their medication.

Cardiovascular disease – which includes heart attacks and strokes – is the UK’s biggest killer.

Statins reduce the build-up of fatty-plaques that lead to blockages in blood vessels.

Fatty deposits narrow arteries, storing up problems for the future

They are already given to high-risk patients who have a one in five chance of a heart attack in the next decade.

Medicines regulator the National Institute of Health and Care Excellence (NICE) is now telling doctors to give statins to low-risk patients with a one in 10 chance of a heart attack in the next decade if measures to improve lifestyle fail.

Effectively every healthy man over 60 – or woman over 65 – could be offered statins.

Those with high cholesterol, smokers, the obese or with a strong family history of heart problems could be offered the drugs at an even younger age.

NICE said it had conducted the “best and most complete review of evidence in this field” and concluded that giving the drugs to low-risk patients would have benefits.

About 13 million people are currently suitable for statins, although only seven million choose to have them prescribed.

The NHS estimates the drugs save 21,000 lives over three years.

Changing the guidelines is estimated to make 4.5 million more people suitable for statins, although only half are likely to choose to be prescribed them.

Prof Mark Baker, the director of the centre for clinical practice at NICE, told the BBC: “Prevention is better than cure.

“One of the mainstays of modern medicine is to use treatments to prevent bad things happening in the future, it’s why we use vaccines and immunisation to prevent infectious disease, it’s why we drugs to lower blood pressure to prevent heart attacks, strokes, and kidneys disease and it’s why we’re using statins now.” 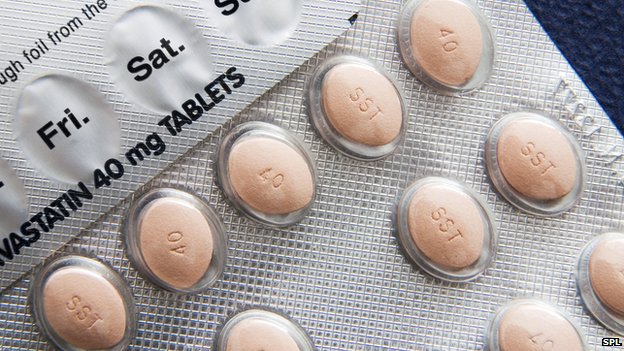 However, the guidelines have opened a schism in the medical profession.

There is a continuing argument about side-effects with NICE arguing there are barely any while other doctors say it is a massive problem.

There have been accusations, denied by NICE, of people drawing up the guidance being influenced by the pharmaceutical industry, wider arguments about “medicalising” a nation and encouraging patients to take pills rather than change their unhealthy lifestyle.

The British Medical Association’s General Practitioner’s committee said: “There is insufficient evidence of significant overall benefit to low-risk individuals to allow GPs to have confidence in the recommendation.”

It said the measure would “distort health spending priorities and disadvantage other patients”.

It would cost £52m to give statins to all 4.5 million people who became eligible. But due to the falling costs of the drugs, the statins bill for the NHS would still be lower than in 2012.

The guidelines immediately come into place in England, devolved institutions in Northern Ireland and Wales need to sign-off the guidelines separately, but have historically followed NICE rulings. There are no plans in Scotland.

The 10% risk threshold is comparable to other European countries.

Prof Peter Weissberg, the medical director at the British Heart Foundation, said: “Doctors will now be able to offer a statin to people at a lower risk, but their prescription is not mandated.

“Just as important is the emphasis on trying lifestyle changes before considering treatments with drugs.”

The president of the Academy of Medical Sciences, Prof Sir John Tooke, said: “Whether or not someone takes drugs to diminish their risk is a matter of personal choice, but it must be informed by accurate information on the balance of risk and benefit in their particular case.

“The weight of evidence suggests statins are effective, affordable and have an acceptable risk-benefit profile.”