Health IT startups have lots of ideas about how Google Glass could be applied to medical care, from telemedicine to information sharing. But what about doctors? How are early adopters in medicine finding Glass useful, and what opportunities do they see for future applications?

Stanford Medicine X brought together four physicians and an entrepreneur via Google Hangout to explore whether medicine is ready for Glass and, if so, where the device fits in. Granted, these are all very tech-minded, forward-thinking doctors – a few of them are even building apps for Glass. So they’re likely more enthusiastic than the average physician about it, but each presented a different perspective based on his specialty.

“In my environment, when I’m doing angiograms in the IR, we don’t have enough vital sign monitors around the room. And it’s often the case that the nurse has to leave the room to go to the Pyxis machine to get medication, so there are many instances when no one’s really looking at the patient’s vital signs. For us, it was important to get vital signs streamed to Glass. That’s an integration we were able to do.”

“Many times as somebody that’s doing a procedure – be it a surgeon, an interventional radiologist, a radiologist – we seek the advice or the second opinion of somebody else. We can do it freely and quickly via this means.”

“The operating room has obvious uses, from transmitting data to telementoring to medical education. We have done proof-of-concept videos in regards to how to use it in the medical education setting, and the students just go crazy about that. Being able to show students the perspective of a surgical procedure and go step-by-step […] is something that excites the students, and we have been working quite a bit on that.”

And here’s how they see Glass being used down the road.

“We have patients who have chronic wounds, for example, or chronic drains or tubes that they have to take care of at home […] For example – patients who have a wound that need to travel to the doctor’s office to have a five minute check, to see what the wound is looking like so that they can get a decision on changing care or whatnot. If that could be done with Glass, the benefit would be that you could get a real eye-sight perspective of the wound and you’re connected in real-time with a provider virtually.” 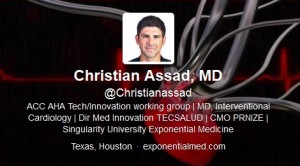 “Initially I think one of the biggest things is the augmented reality that Glass gives you and hopefully making exercise far more exciting than it used to be. Some people don’t like running; now some people are developing an application that’s a zombie chase. […] Now kids have a reason to go outside and play laser tag with their Google Glass. Some people are not fond of giving them technology at such an early age, but this is the world we live in. I believe this technology can be used to create the games for these guys to get healthy in a really enjoyable manner.”